On the right side of the Main Window are two tabbed windows, the Status Window and Command Window.

Click on the tabs at the bottom of the window to select between them:

Controls at the top of the Command window are used to configure the window's contents:

Click the Select Layout icon to bring up the Widget Selector window, which controls whether a widget is shown and the order of the widgets: 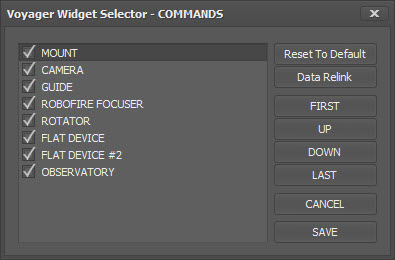 The buttons in the right column control the ordering of the widgets:

Controls at the top of the command window

The yellow status text indicates the current state of the mount: Parked, Tracking, Stopped (not tracking), Slewing, or Homed

The Mount widget can send immediate commands to the mount:

The buttons in the Mount widget send the following commands to the mount:

The Camera command widget provides a way to send immediate commands to the camera's cooling system and filter wheel. 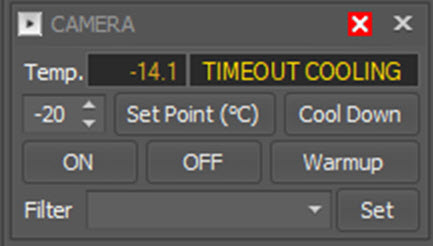 The camera's current sensor temperature is displayed along with a status message indicating the current cooling operation: OFF, COOLING, WARMUP RUN, COOLDOWN TIMEOUT.

Beneath the "Temp." display is a control to set the desired sensor temperature.

Double click the temperature and type in the desired camera sensor temperature, or use the up and down arrows to change the value to the desired setting.

Click the SetPoint (°C) button to apply the change.

The remaining buttons in the widget send the following commands to the camera's cooling system:

Important Note! These immediate commands bypass any cooler management that may be in progress from other actions. This could lead to unintended results. The Sequence dialog can also control cooling actions. 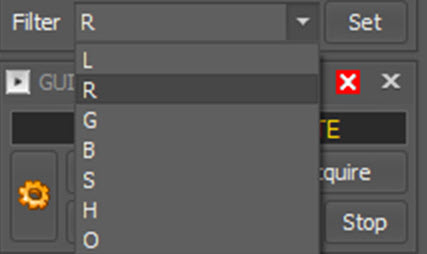 All of these commands can be automated through Setup, Sequence and DragScript settings and commands, but this window lets you also send commands to the guider for immediate execution.

Click the buttons to send the following commands to the guiding system:

Click the gear icon on the left to bring up the guiding configuration window: 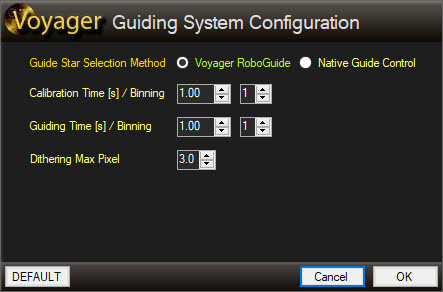 From this window, you can select whether to use Voyager RoboGuide or your guiding system's Native Guide Control. You can also set:

There are three buttons at the bottom of this window:

The Focuser command widget can send immediate commands to the connected focuser.

Click in the gray box and type in the desired focuser position, then click the Goto button to command the focuser to move to that position.

The bottom row of buttons command the focuser to move relative to its current position: 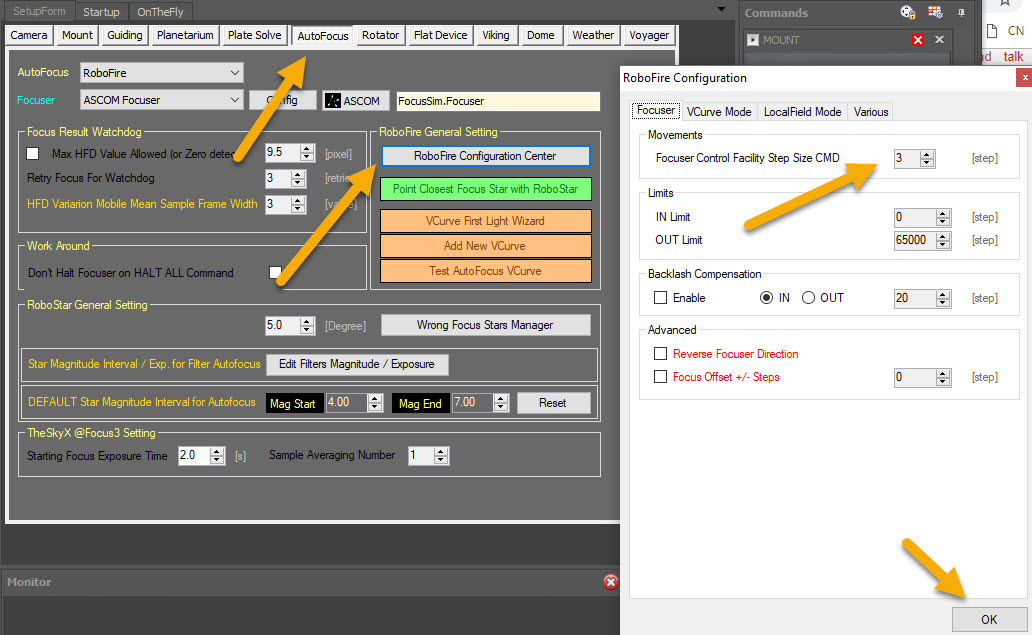 The Rotator command widget provides the capability to send commands directly to a connected rotator, which moves the camera to a specified PA (position angle).

If a rotator is connected, the widget appears like this:

The first line of the rotator widget displays the current PA in degrees, and the rotator status: IDLE if it is not moving, ROTATING if it is moving.

The second line of the widget has a control for setting a new PA:

The last line of the rotator widget has buttons that perform the following commands:

Important Note! The direction of rotation and the rotation algorithm is controlled by the ASCOM rotator driver. Voyager sends the ASCOM commands to the rotator to move to a position and the ASCOM driver decides which way to move. There are some Gemini brand rotators that will move to position zero (0) if you press the HALT button. If you use this rotator in a sequence, you can set up Voyoager to indicate that you do not intend to use the HALT function

A Flat Device is an evenly illuminated panel used to take flat calibration frames. There are several types of flat panel devices, and the commands supported by them vary depending on their capabilities. If supported by the device, Voyager can send commands to turn a panel on or off, open or close the panel (move it out of the way or put it into position for use), and adjust the panel's brightness.

The first line of the Flat Device widget shows the current brightness of the flat panel, if known, and the status of the device, either IDLE or MOVING if the device can be opened or closed.

The buttons perform the following actions, if supported by the flat panel device:

The Observatory widget shows the status of a connected observatory (typically a dome or roll-off roof building) and can send commands to the observatory for immediate execution.

The available commands will depend on the capability of the observatory and the software driver controlling it. For example, a roll-off roof observatory may only support the Open and Close commands. A domed observatory is usually rotatable and may also have a shutter that can be opened and closed. A rotating observatory dome may be "slaved" to the mount, meaning its position will change automatically as the mount moves so the telescope has an unobstructed view.

The command buttons of the Observatory widget immediately execute the following commands, if the Dome control doesn't allow the command, the command will be disabled: