Voyager has three ways to perform actions and take images:

The DragScript workspace can be entered two different ways:

When you first enter the DragScript workspace, if there is no script loaded, it will look like this: 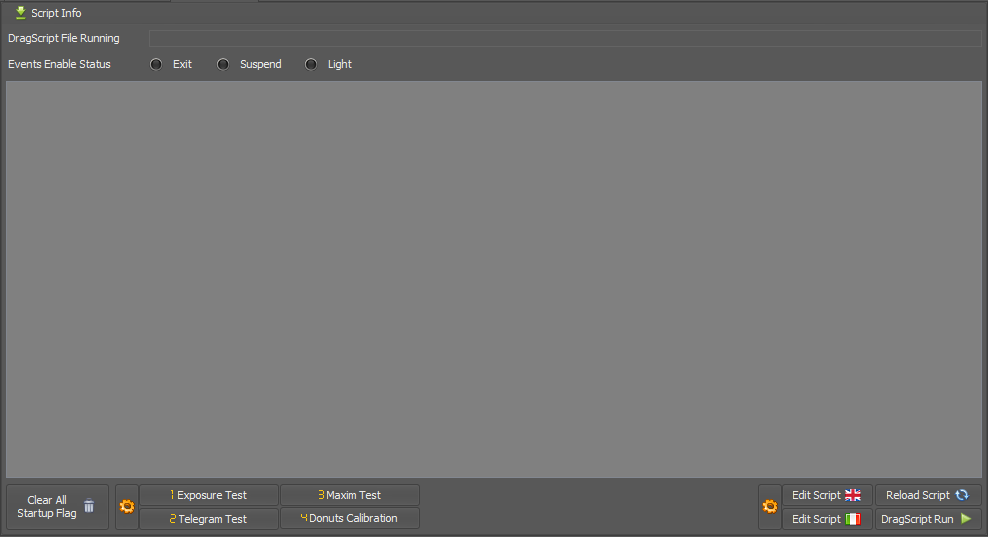 Once a script is loaded, it will fill the light gray area in the middle of this workspace.

Once you load a script by clicking the gear icon, the script appears in the workspace like this: 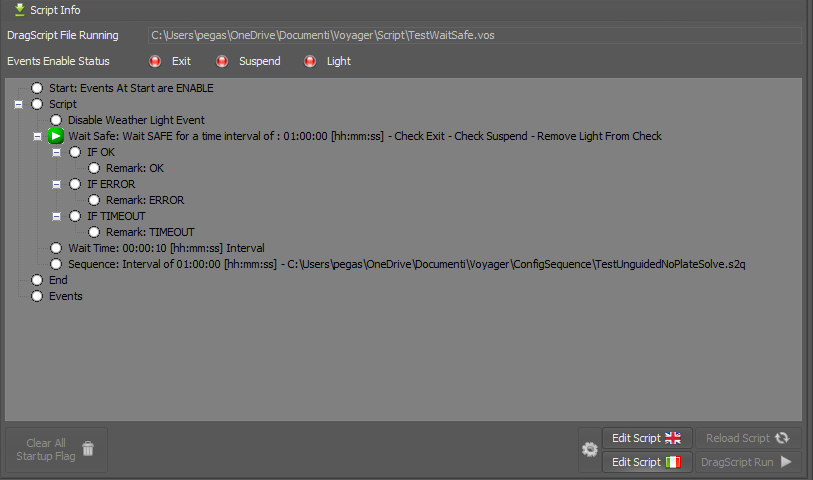 After you click DragScript Run to run the script, an arrow will appear next to the currently executing action:

Messages related to the running DragScript will appear in the Monitor window so you can follow the progress of the script in detail:

Click the Abort button to stop the running script. There may be a brief delay until the currently running action can be interrupted

DragScript: Starting from an Arbitrary Line

starts execution from the beginning of the DragScript.

You can also start the script from an arbitrary line.

Right-click on the line where you'd like to start execution. A menu appears:

These two choices are available for any line in the DragScript.

Setting Sequence Options from a DragScript

Important Note! Sequence Startup Override and Sequence Startup Normal create or clear a temporary startup override on the selected Sequence or Research & Survey line. They do not run the sequence - use the Start Script from Here or DragScript Run options to do that 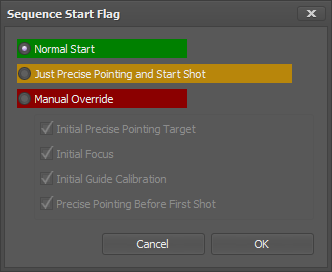 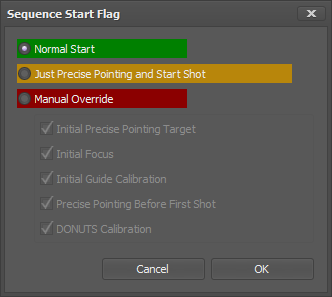 If an override is in effect, two blue triangles appear before the Sequence line: 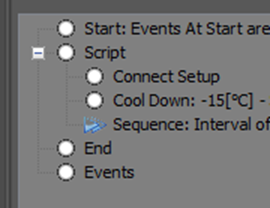 To clear the Override, right click the line and choose the Sequence Startup Normal menu option:

Starting a DragScript from the Command Line

You can automatically launch a DragScript when you start Voyager from the command line with the syntax: 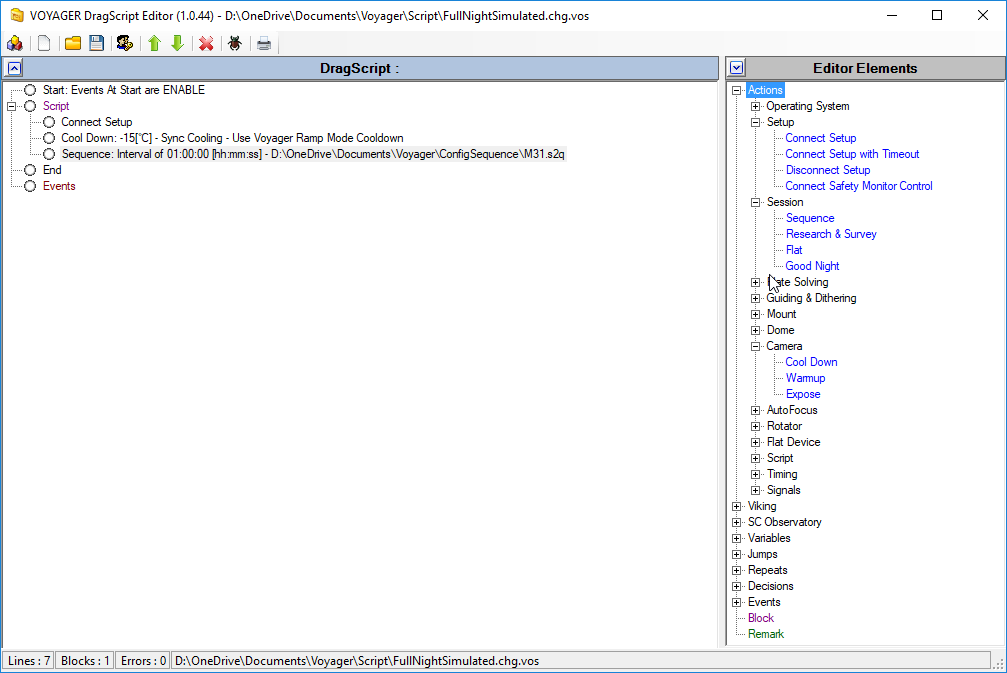 At the top of the DragScript Editor window are icons to perform the following actions:

The DragScript window contains the script you are currently editing. Drag items from the Editor Elements window on the right and drop them on the section where you want them to go, and they will be added to your script.

You can drag a block onto the Script, an existing block, or any of the IF decision actions.

You can drag any element to a block IF or a block DO action.

If the cursor doesn't change, you are probably using the DragScript editor on a remote PC and your remote viewer, such as TeamViewer, has been set to not change the local mouse pointer to match the remote machine's mouse pointer.

OR -- on Windows 10, if your remote machine does not have a mouse enabled, the mouse pointer won't change shape. To fix this:

Here's a brief example. Let's say we want to add the action Goto Near Zenith before the Expose: action in the above script. 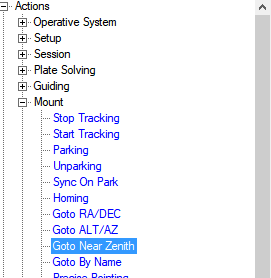 Once you have created your initial DragScript by dragging elements from the right window to the script window, you can modify your script in several ways: 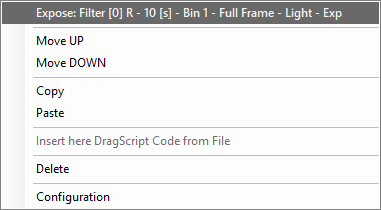 Important Note! The target of a Drag and Drop must be a top level element such as Script, Block, End, Events, IF OK/ERROR/TIMEOUT, etc. The mouse cursor will be the international not symbol (circle with diagonal line) if you cannot drop the element at that location. A gray rectangle is added to the mouse cursor when it is hovering over a suitable target

Important Note! If you are using a remote desktop such as Teamviewer and having trouble with Drag and Drop, try Copy and Paste to place an element at any indent level in the script, e.g. at the end of an existing IF OK block

Inserting a DragScript from a File

If you have a fragment of DragScript code that you would like to use in several places in your script, or one that you frequently use in different scripts, you can create the DragScript fragment, save it to a file, and then insert it and modify it as many times as necessary into your final script.

For example, we created this script to run a sequence, check for success, and go to the next block if OK, else send an email notifying us of the problem and try again, three times.

Note that we created this DragScript code directly in the main Script block. When we insert this later into another DragScript, a block is automatically created to hold the new fragment, so we don't need to put this in a block now:

We saved this script to a file called Example-Block-2.

Now we open the script to which we want to add this fragment: 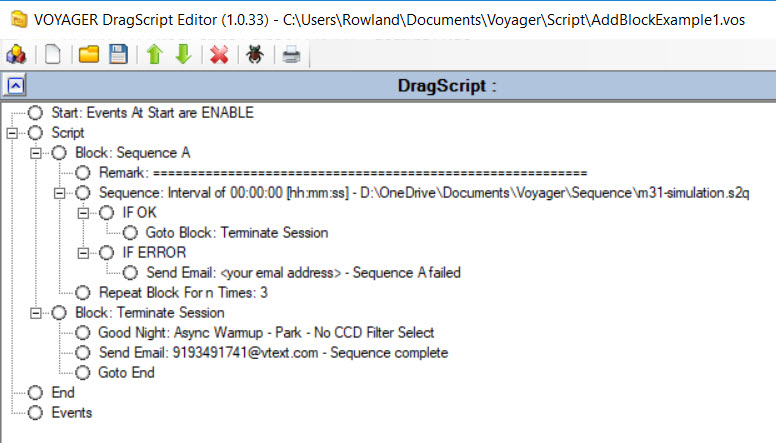 Right click on the Script block tag and select Insert DragScript from File. Choose the file containing the DragScript fragment we saved above and click Open:

The DragScript fragment is added in a new block at the end of the Script block. Highlight the new Block tag (Block 1 in this example), use the up/down arrow toolbar icons to move the block to your desired location. Edit the block as required and don't forget to save your changed script. 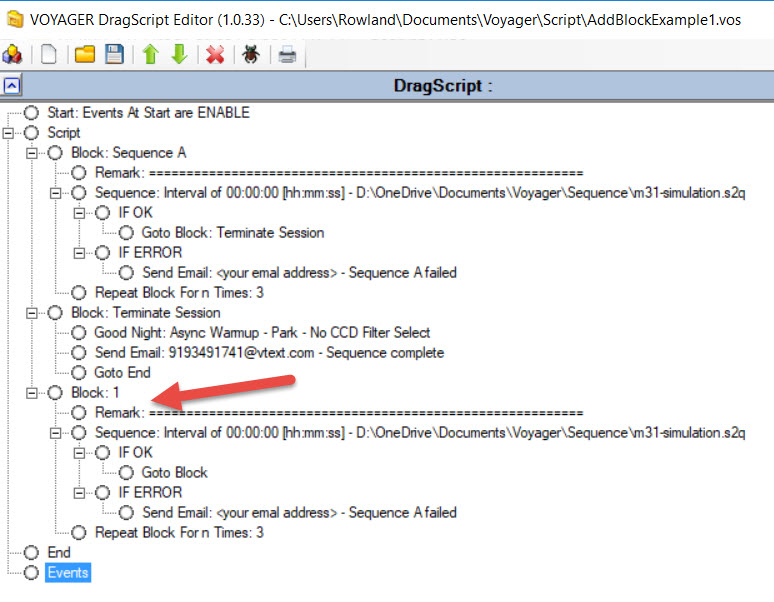 icon in the toolbar to debug the loaded script in the DragScript simulator.

The Simulator lets you understand how control will flow in your script after each action is completed, whether with an OK outcome (success), an error, or a timeout.

It also shows you the control flow when an Emergency Exit, Emergency Suspend or Emergency Resume event are raised.

No actions are executed during the simulator session. This is just to understand the flow of control of your script under different conditions.

Important Note! In addition to tracing the flow of control in the simulator's right window, a green check mark appears next to the currently executing line (simulated) in the left pane, as seen in the previous screenshot

As of Voyager 2.1.1c, the DragScript simulator will display the results of testing counter variables in a DO IF COUNTER VALUE statement.

In this example, the variable numseqs was set equal to 1 at the start of the DragScript. 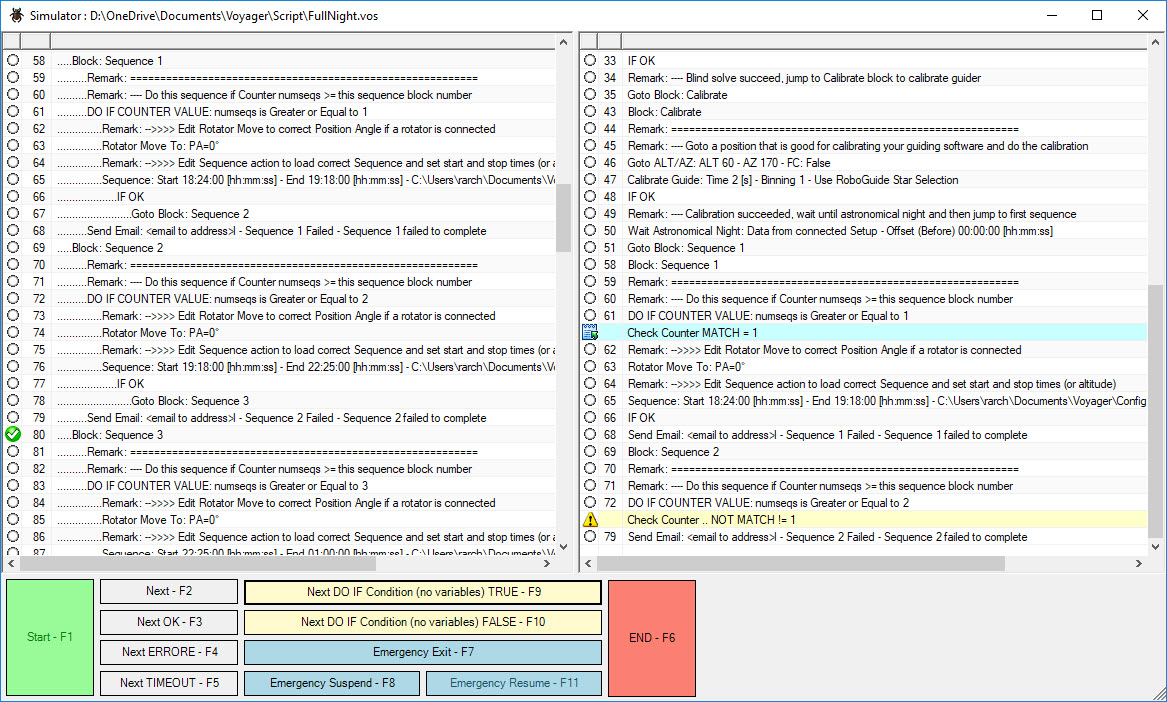 To learn about the individual DragScript elements, visit the DragScript Elements page.