DragScript can be used to automate your imaging from startup to shutdown.

It can also be used to automate a single exposure, or image sequences of one or more targets.

It offers great flexibility, which is powerful, but can leave you wondering where to start.

We will post some sample DragScripts here, with comments, to help "prime the pump" of ideas on how to leverage this tool.

We have opened a dedicated section in our forum dedicated to Sample Dragscripts:

We welcome your contributions to expand this library for the community.

Here are a couple of simple DragScripts to get you started.

Multitargeting is very easy with a simple Voyager DragScript. You don't need a huge script, just a few lines, no code to write. Just drag and drop as many Sequence actions as you need from Session node of the DragScript Editor Elements window and drop them on the Script block:

Double click each Sequence action and set the start and end times or altitudes. Then load the script into Voyager's DragScript tab and run it.

With a couple of additions, our DragScript will retry a Sequence until a time we specify if there are any errors (e.g. Guiding fails) encountered during the running of that Sequence.

Error Management is useful if you have trouble with setup or passing clouds and you don't have a weather system, or similar problems. Voyager will restart the sequence for you until the time you asked. Usually the best practice is to set the repeat until time equal to the Sequence finish time.

Other nights just change the target and timing if needed, and use Save As to save the DragScript with a new name.

Best practice is to add your opening night and closing night blocks. You can use the precompiled “Multi Sequence Robot” script built into the editor as a reference.

And remember, with your Voyager license you have a built-in help call with the developer to guide you in creating your first DragScripts.

Voyager includes two scripts that can be accessed from the command bar: 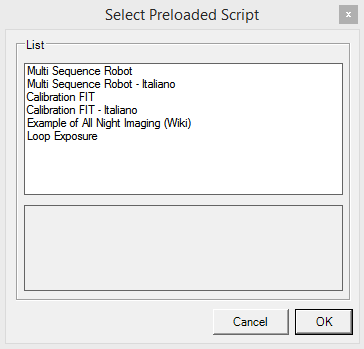 Let's first examine the Calibration FIT script, which is a short script to take calibration frames.

The Calibration FIT that comes preloaded with Voyager has Italian block names. You can download one with English block names here: Calibration-FIT-English.vos

This preloaded DragScript is an example of building a calibration library of bias frames and dark frames with three different exposure lengths, 300, 900 and 1200 seconds: 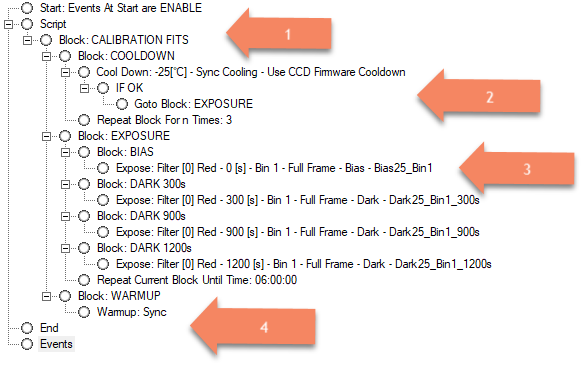 The Loop Exposure that comes with Voyager take a series of exposure in a loop with an interval of 1 second between each (plus time to download and save it on disk).

Coming with a default of 2s in bin2 half frame, user can modify this setting and the interval time to his needed.

Number or repeats on loop are 200, always customizable.

The second pre-loaded script that comes with Voyager is the "Multi-Sequence Robot." This is a shorter, simpler version of the "All Night Imaging" script documented below.

The version that currently ships with Voyager is commented in Italian. You can download a version with English comments here: Multi-Sequence-Robot-English.vos

Initial Setup and Wait Until Night 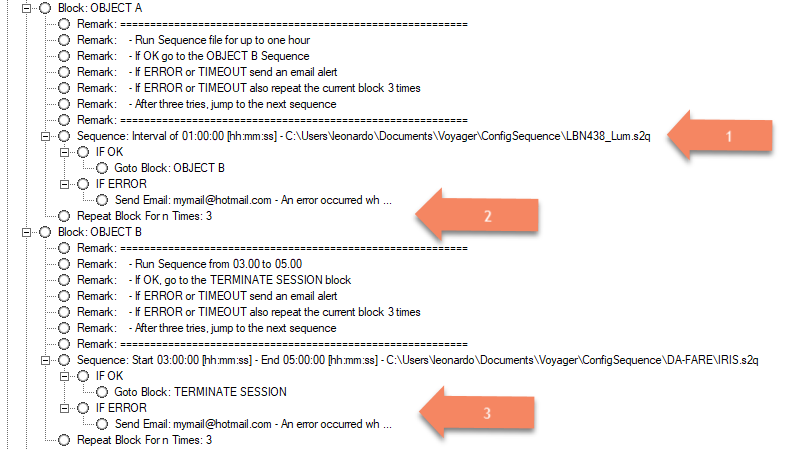 That's it! At a minimum, you will need to edit the Send Email actions to use your email address and SMTP server information, and edit the Sequence actions to load the sequences for the images you want to take. It's also likely that you will want to edit the start and stop times throughout the script.

Here's the full script, which you can also download here: Multi-Sequence-Robot-English.vos 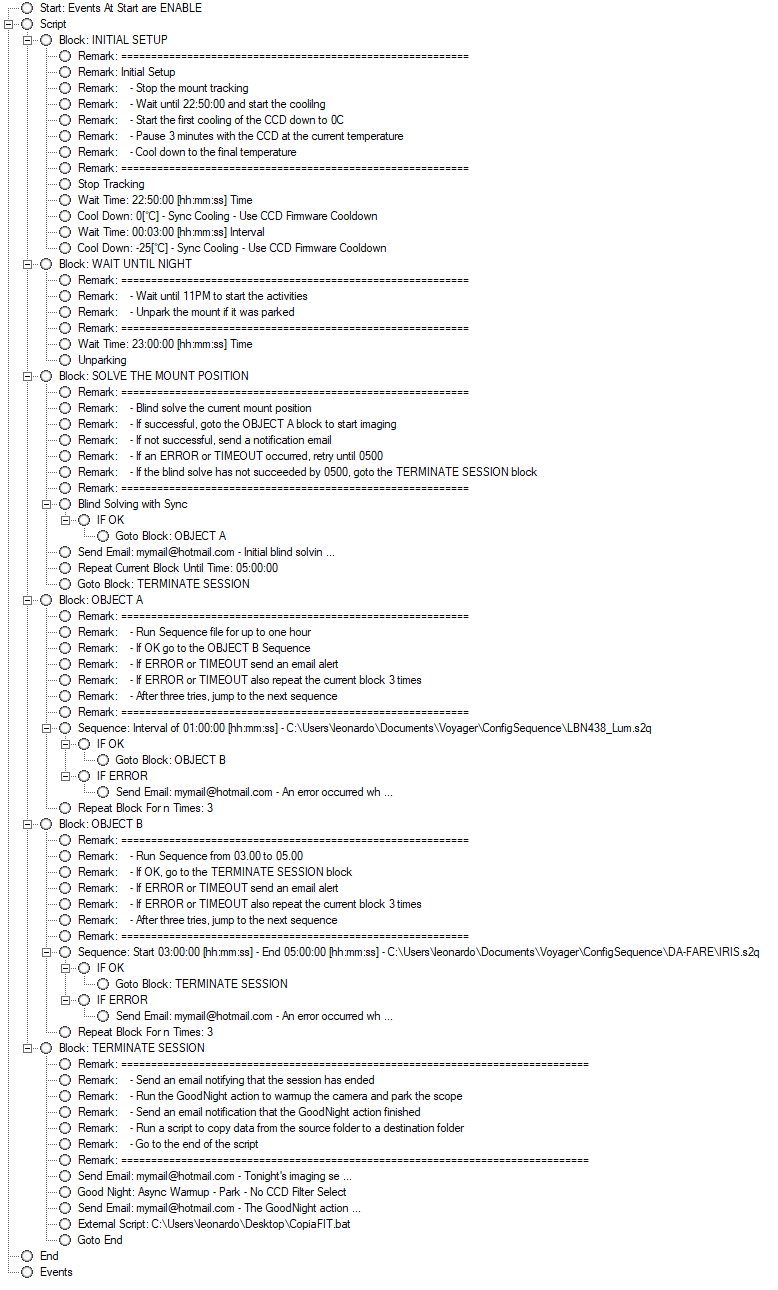 This DragScript is rather extensive and designed to automate your imaging from startup to shutdown, including running from one to seven image-taking sequences.

Emergency Suspend, Resume and Exit events are handled. It is assumed that a weather monitoring device is attached and Weather Setup has been filled out.

Signals from the weather monitoring device trigger the Emergency Events. The Weather Setup window gives complete control over which weather conditions cause which events.

You could also just build a script using the parts of this script that are relevant to your situation and goals.

You can download the sample script here and edit it to suit your purposes: Startup-to-Shutdown-Example.vos

We will look at the script in sections as it is rather long, primarily because we have seven nearly identical sections to run up to seven sequences in a single night

Connect Setup and Cool the Camera

Important Note! The Wait for Astronomical Night actions require either your latitude and longitude to be entered or your setup to be connected if you get this information from your mount. Otherwise an error will occur when Voyager tries to calculate the exact time of astronomical night.

Important Note! The Send Email notifications throughout this script must be edited once to include your email address and SMTP server login information. If you download the script, you must do this or notifications will fail

Important Note! The Goto Near Zenith command works if the mount is aligned. If you are travelling and your mount is not yet aligned, you may need to do a manual alignment following your mount's instructions and then do the Goto Near Zenith and Blind Solve and Sync from the OnTheFly workspace

This same series of events and tests is repeated in this script for seven sequence blocks. I chose seven because that's typically the most targets I image in a night. You can adjust the script to have more or less to suit your own requirements. 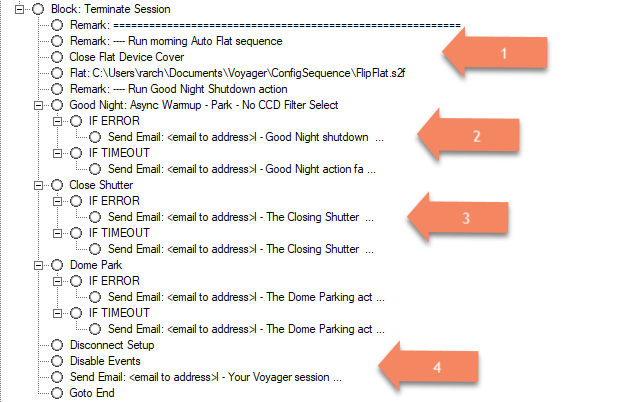 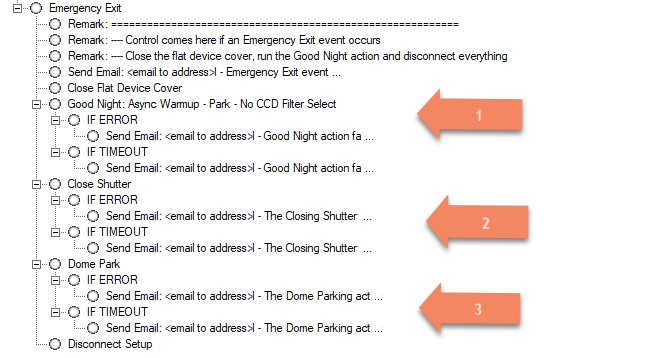 For reference, here is the full script, which you can download from: Startup-to-Shutdown-Example.vos